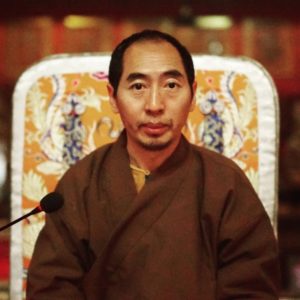 It is an extraordinary honour and joy for us to welcome the 11th Lelung Rinpoche to Ganden Chökhor. The long line goes back 690 years.

The earlier incarnations of Lelung Rinpoche, also known as Jedrung Tulkus, played an important role in the history of Tibet and especially in the development of Buddhism. The Jedrung Tulkus lineage began with the great Master-Adept Lhodrag Namkha Gyaltsen, whose direct disciples included Master Je Tsongkhapa, founder of the Gelungpa School of Tibetan Buddhism.

The lineage of Lelungs are very close to the Dalai Lama.

Interested in Chöd: His predecessors have written countless practice texts and commentaries – including texts from the Bhagavati single Tröma Nagmo.

The new Lama Tsongkapa cycle opens with a outstanding text

The course also offers the opportunity to meditate and reflect together.

(We hope that H.E. Lelung Rinpoche will not have to travel to China at short notice during this time – the probability is very small – but he asked us to inform him of this in the announcement).