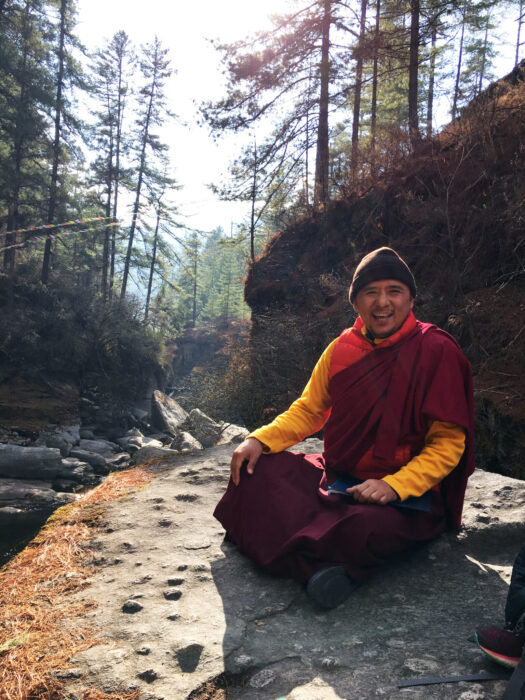 Grown up in both cultures – East and West – Tulku Jigme Thrinley Rinpoche is a bridge between these two worlds. He was recognized by both – His Holiness Dudjom Rinpoche and Kyabje Trulshik Rinpoche (Nyingma – teacher of His Holiness the Dalai Lama) – as an important reincarnated Nyingma teacher of the “old school” of Tibetan Buddhism.

In the West Jigme Thrinley Rinpoche serves as principal teacher, spiritual director and co-founder of the Palmo Center for Peace & Education and the Nyengyud Samten Choeling Institute for Wisdom and Compassion (Eugene Sakya Center) and also at branch centers.

He was born in India, son of Naljorma Jangchup Palmo, who is highly regarded as a “hidden yogini” – a female chöd meditation master. His mother had a profound influence on Rinpoche’s spiritual life.

Tulku Jigme Thrinley Rinpoche received his initial Buddhist education in India and Nepal under the guidance of Kyabje Trulshik Rinpoche and Kyabje Tenga Rinpoche. Later he moved to Eugene, Oregon/America, where he had his western education. At first Rinpoche served as a translator and assisted various masters. Later he taught independently and laid the foundation for promoting the practice of Buddhist teachings.

From His Holiness the Dalai Lama and these outstanding masters Rinpoche received direct introduction to the nature of mind, many important initiations, text transmissions and instructions of the four tradition lines.

He has completed several retreats on Ngondro and Shamata under the direction of Kyabje Trulshik Rinpoche. Tulku Jigme Thrinley Rinpoche travels and teaches widely throughout Europe and America, conducting workshops, readings and courses on important works in the Tibetan Buddhist tradition. This in various places such as Dharma centers, libraries, art galleries, colleges, academies and universities. He teaches with humor, clarity and wisdom, according to the “Western spirit”. In 2013 Rinpoche and his center hosted/organized the historic visit of His Holiness the Dalai Lama to Oregon/USA. With the blessing of His Holiness the Dalai Lama, Tulku Jigme Thrinley Rinpoche is co-founder of the Palmo Center for Peace & Education.